An interesting idea to create a CAPE Ratio with a better predictability:

The accuracy of U.S. stock return forecasts based on the cyclically-adjusted P/E (CAPE) ratio has deteriorated since 1985. The issue is not the CAPE ratio, but CAPE regressions that assume it reverts mechanically to its long-run average. Our approach conditions mean reversion in the CAPE ratio on real (not nominal) bond yields, reducing out-of-sample forecast errors by as much as 50%. At present, low real bond yields imply low real earnings yields and an above-average “fair-value” CAPE ratio. Nevertheless, with Shiller’s CAPE ratio now well above its fair value, our model predicts muted U.S. stock returns over the next decade. We believe that our framework should be adopted by the investment profession when forecasting stock returns for strategic asset allocation.

“Valuation metrics such as price-earnings ratios are widely followed by the investment community because they are believed to predict future long-term stock returns. Arguably the most popular is Robert Shiller’s cyclically-adjusted P/E ratio (or CAPE) which is currently above its long-run average. However, the out-of-sample forecast accuracy of stock forecasts produced by CAPE ratios has become increasingly poor. In this paper we have shown why and offer a solution to offer a more robust approach to produce long-run stock return forecasts.

The problem is not with the CAPE ratio, but with CAPE regressions. We show that a common industry approach of forecasting long-run stock returns can produce large errors in forecasted returns due to both estimation bias and its strict assumption that the CAPE ratio will revert over time to its long-run (and constant) mean. Although far from perfect, our model’s out-of-sample forecasts for ten-year-ahead U.S. stock returns since 1960 are roughly 40-50% more accurate than conventional methods. Real-time forecast differences in 10-year-ahead stock returns are statistically significant, and have grown to exceed three percentage points after 1985 given the secular decline in real bond yields. In our model, lower real bond yields imply higher equilibrium CAPE ratios. This framework would appear to explain both elevated CAPE ratios and robust stock returns over the past two decades.

Figure 8 shows the actual real-time forecast of our two-step model for U.S. stocks. Our fair-value CAPE approach tracks the actual rolling 10-year-ahead U.S. stock returns fairly well, declining throughout the 2000s and anticipating a strong rebound immediately following the global financial crisis in 2009. Traditional CAPE regressions are also highly correlated with future returns, yet they consistently project lower 10-year-ahead stock returns than what has been actually realized by investors over our sample period. 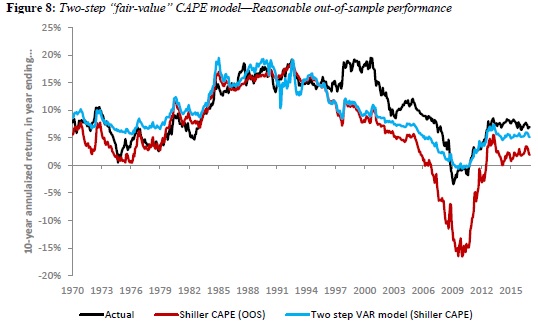 As of June 2017, our model projects a guarded, lower-than-historical return on U.S. stocks of approximately 4.9% over the coming decade.”