We carry out a study to evaluate and compare the relative performance of the distance and mixed copula pairs trading strategies. Using data from the S&P 500 stocks from 1990 to 2015, we find that the mixed copula strategy is able to generate a higher mean excess return than the traditional distance method under different weighting structures when the number of tradeable signals is equiparable. Particularly, the mixed copula and distance methods show a mean annualized value-weighted excess returns after costs on committed and fully invested capital as high as 3.98% and 3.14% and 12.73% and 6.07%, respectively, with annual Sharpe ratios up to 0.88. The mixed copula strategy shows positive and significant alphas during the sample period after accounting for various risk-factors. We also provide some evidence on the performance of the strategies over different market states.

"Currently, there are three main approaches for pairs trading: distance, cointegration and copula. The traditional distance method has been widely researched and tested throughout the pairs trading literature. However, this approach only captures dependencies well in the case of elliptically distributed random variables. This assumption is generally not met in practice, motivating the utilization of copula-based models to address the univariate and multivariate stylized facts for multivariate financial return stocks. Nevertheless, the use of copulas in this context is still recent and needs more comprehensive and profound studies.

In this paper, we will conduct an empirical investigation to offer some evidence of the behavior of the distance and mixed copula strategies. We propose, differently from Rad, Low, and Faff (2016) and Xie, Liew, Wu, and Zou (2016), a mixed copula-based strategy to capture linear and nonlinear associations and at the same time cover a wider range of possible dependence structures. We aim to assess whether building a more sophisticated model can take advantage of any market frictions or anomalies uncovering relationships and patterns. We find that the mixture copula strategy is able to generate a higher mean excess return than the distance method when the number of trading signals is equiparable. We also want to investigate the sensitivity of the copula method to different opening thresholds and how trading costs affect the profitability of these strategies.

We compare the performance out-of-sample of the strategies using a variety of criteria, all of which are computed using a rolling period procedure similar to that used by Gatev, Goetzmann, and Rouwenhorst (2006) with the exception that the time horizon of formation and trading periods are rolled forward by six months. The main criteria we focus on are: (1) mean and cumulative excess return, (2) risk-adjusted metrics as Sharpe and Sortino ratios, (3) percentage of negative trades, (4) t-values for various risk factors, and (5) maximum drawdown between two consecutive days and between two days within a maximum period of six months. 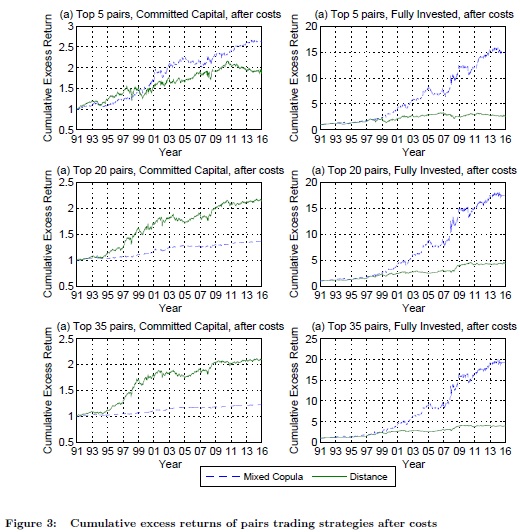 The main findings when the number of trading signals is equiparable are summarized below.

1. The mixed copula strategy is able to generate a higher mean excess return and a Sharpe ratio over twice as much as what we get from investing in the traditional distance method after trading costs.

2. The mixed copula approach delivers economically larger alphas than the distance method for both weighting schemes (10 and 58 bps per month on committed and fully invested capital, respectively) after transaction costs, suggesting the importance of the proposed method. It should also be noted that the alphas provided by mixed copula and distance strategies are significant at 1% and 10%, respectively, after accounting for several asset pricing factors such as momentum, liquidity, profitability and investment. Thus, the results show that the profits are not fully explained by the other factors.

3. As it can be observed, the right-hand-side tail (of positive outcomes) of the density of the five-year Sharpe ratio is longer for the mixed copula strategy, implying that the copula-based strategy has a better risk adjusted performance than the distance approach.

5. Neither strategy consistently shows superiority over all subperiods, at least on committed capital. Overall, the mixed copula strategy shows a superior out-of-sample performance relative to the distance approach in the second and third subperiods (1996-2000 and 2001-2005) and after the subprime mortgage crisis (2011-2015), while the distance method delivers a significant better performance in the first (1991-1995) and fourth subperiods (2006-2010) on committed capital."