Once again, is cryptocurrency market efficient? Or can we find simple trading strategies based on price overreactions? :

This paper examines price overreactions in the case of the following cryptocurrencies: BitCoin, LiteCoin, Ripple and Dash. A number of parametric (t-test, ANOVA, regression analysis with dummy variables) and non-parametric (Mann–Whitney U test) tests confirm the presence of price patterns after overreactions: the next-day price changes in both directions are bigger  than after “normal” days. A trading robot approach is then used to establish whether these statistical anomalies can be exploited to generate profits. The results suggest that a strategy based on counter-movements after overreactions is not profitable, whilst one based on inertia appears to be profitable but produces outcomes not statistically different from the random ones. Therefore the overreactions detected in the cryptocurrency market do not give rise to exploitable profit opportunities (possibly because of transaction costs) and cannot be seen as evidence against the Efficient Market Hypothesis (EMH).

This paper provides new evidence on the overreaction anomaly in the cryptocurrency market by testing the following two hypotheses: after one-day abnormal price movements (overreactions), on the next day abnormal price (i) counter-movements or (ii) momentum movements are observed. For this purpose, a number of statistical tests (both parametric and non-parametric) are carried out. A trading robot approach is then used to investigate whether any detected anomalies generate exploitable profit opportunities. The analysis is carried out for four different cryptocurrencies (BitCoin, LiteCoin, Ripple and Dash).

Empirical Results: analysis confirms the presence of a statistical anomaly in price dynamics in the cryptocurrency market after overreaction days price changes in both directions (in the direction of overreaction and counter movement) are bigger than after normal days. 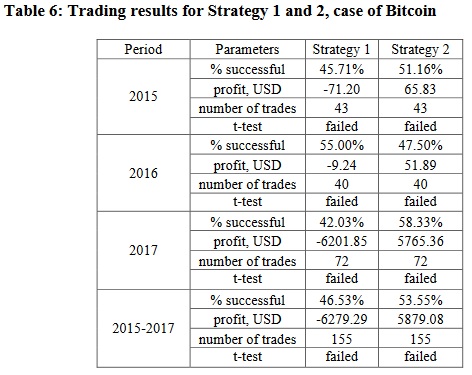