Our recommended read to all parties interested in cryptocurrencies …

This paper investigates whether Tether, a digital currency pegged to U.S. dollars, influences Bitcoin and other cryptocurrency prices during the recent boom. Using algorithms to analyze the blockchain data, we find that purchases with Tether are timed following market downturns and result in sizable increases in Bitcoin prices. Less than 1% of hours with such heavy Tether transactions are associated with 50% of the meteoric rise in Bitcoin and 64% of other top cryptocurrencies. The flow clusters below round prices, induces asymmetric auto-correlations in Bitcoin, and suggests incomplete Tether backing before month-ends. These patterns cannot be explained by investor demand proxies but are most consistent with the supply-based hypothesis where Tether is used to provide price support and manipulate cryptocurrency prices.

In this paper, to shed light on the driving forces behind the recent boom of cryptocurrency markets, we focus on variants of two main alternative hypotheses for Tether: whether Tether is ’pulled’ (demand-driven), or ’pushed’ (supply-driven).

First, if Tether is ’pulled’ or demanded by investors who own fiat currency, the issuance of Tether facilitates the demand of these investors who value the flexibility of a digital currency and yet the stability of the dollar ’peg’. The demand for Tether could also arise because of its practicality for engaging in cross-exchange pricing arbitrage.

Alternatively, if Tether is ’pushed’ on market participants, Bitfinex supplies Tether regardless of the demand from investors with fiat currency to purchase Bitcoin and other cryptocurrencies. The acquired Bitcoins can then gradually be converted into dollars. In this setting, the Tether creators have several potential motives. First, if the Tether founders, like most early cryptocurrency adopters and exchanges, are long on Bitcoin, they have a large incentive to create an artificial demand for Bitcoin and other cryptocurrencies by ’printing’ Tether. Similar to the inflationary effect of printing additional money, this can push cryptocurrency prices up. Second, the coordinated supply of Tether creates an opportunity to manipulate cryptocurrencies. When prices are falling, the Tether creators can convert their Tether into Bitcoin in a way that pushes Bitcoin up and then sell some Bitcoin back into dollars to replenish Tether reserves as Bitcoin price rises. Finally, if cryptocurrency prices crash, Tether creators essentially have a put option to default on redeeming Tether, or to potentially experience a ’hack’ where Tether or related dollars disappear. Both the ’pushed’ and ’pulled’ alternatives have different testable implications for flows and cryptocurrency returns that we can take to the powerful blockchain data.

We begin our exercise by collecting and analyzing both the Tether and Bitcoin Blockchain data through a series of algorithms we implement to reduce the complexity of analyzing the blockchain. Tether is created, moved to Bitfinex, and then slowly moved out to other crypto-exchanges, mainly Poloniex and Bittrex. Interestingly, almost no Tether returns to the Tether issuer to be redeemed, and the major exchange where Tether can be exchanged for USD, Kraken, accounts for only a small proportion of transactions.

We then examine the flow of coins identified above to understand whether Tether is pushed or pulled, and examine the effect of Tether, if any, on Bitcoin prices. First, following periods of negative Bitcoin return, Tether flows to other exchanges are used to purchase Bitcoin. Second, these flows seem to have a strong effect on future Bitcoin prices. They are present only after periods of negative returns and periods following the printing of Tether, that is, when there is likely an oversupply of Tether in the system. A placebo test finds no evidence of Bitcoin price movements following large flows of Bitcoin from Poloniex and Bittrex to major exchanges other than Bitfinex. This phenomenon strongly suggests that the price effect is driven by Tether issuances.

To illustrate the potential magnitude and predictive effect of Tether issuances on Bitcoin prices, we focus on the hours with the largest lagged combined Bitcoin and Tether flows on the two blockchains. These 87 hours have large negative returns before the flows but are followed by large return reversals. These 87 events account for less than 1% of our time series (over the period from the beginning of March 2017 to the end of March 2018), yet are associated with 50% of Bitcoin’s compounded return, and 64% of the returns on six other large cryptocurrencies (Dash, Ethereum Classic, Ethereum, Litecoin, Monero, and Zcash).

Consistent with Tether being used to buy Bitcoin when prices drop, we find a statistically and economically strong reversal in Bitcoin prices, but only following negative returns. The Bitcoin reversal did not exist before Tether was prevalent in the market and disappears during the period when Tether stops being printed. 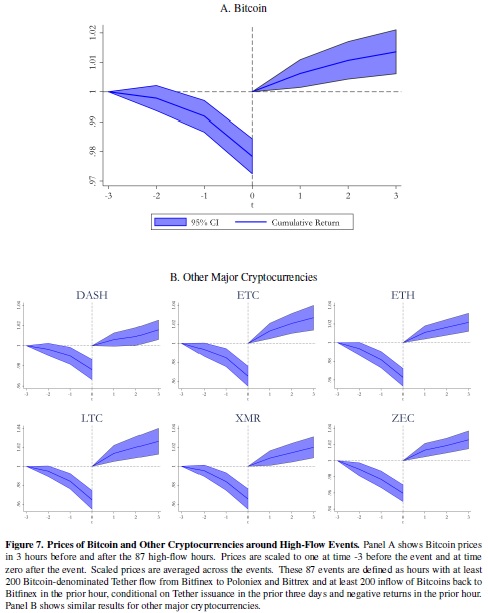 The results are consistent with the Tether issuers pushing out Tether to stabilize the price of Bitcoin, but we investigate these issues further. Investors hoping to stabilize and drive up the price might concentrate on certain price thresholds as an anchor or price floor. This follows the idea that if investors can demonstrate a price floor, then they can induce other traders to purchase. Interestingly, Bitcoin purchases by Bitfinex strongly increase just below multiples of 500. This pattern is only present in periods following printing of Tether and not observed by other exchanges. To address causality, we use the discontinuity in Tether flow at the round threshold cutoffs as an instrument to measure the effect of Tether on Bitcoin prices. The instrumental regression results are even stronger, indicating that Tether flows are causing the positive return.

If Tether is pushed out to other crypto exchanges rather than demanded by investors with dollars in hand, Tether may not be fully backed by dollars when issued. However, if the issuers wished to post monthly bank statements to shore up dollar reserves and appear fully backed, this would necessitate the liquidation of the purchased Bitcoins at the end-of-the-month (EOM). Interestingly, we find a significant negative EOM abnormal return of 6% in the months with strong Tether issuance. The EOM Bitcoin returns are highly correlated with the magnitude of Tether issuance, and no abnormal returns are observed in months when Tether is not issued. 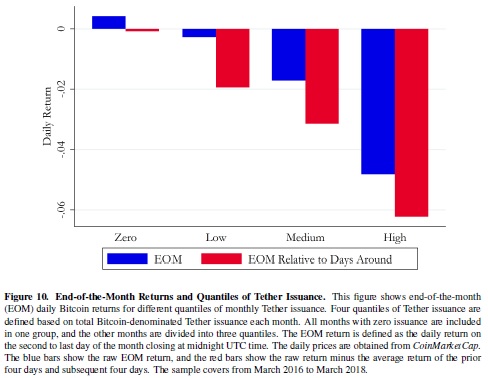 Our results are consistent with Tether being pushed out onto the market and not primarily driven by investors’ demand, but we nevertheless further examine two direct implications of the ’pulled’ hypotheses. In particular, we examine if the flows of Tether bear much relation to a proxy for its demand from investors, the premium for Tether relative to the U.S. Dollar exchange rate. We find little evidence to support this hypothesis. Another related alternative is that the crossexchange arbitrage to eliminate pricing discrepancies across exchanges is the primary driver of the Tether flow, but this hypothesis is not supported by the data. Although we find little support for demand-based proxies, we hypothesize that there are some sources for legitimate demand for Tether, however, those are not the ones that dominate the flow patterns observed in the data.