There has been the shadow of suspicion that autocratic regimes are slightly manipulating GDP growth numbers. A recent academic paper offers interesting idea how to double check suspicious claims of growth …

Title: How Much Should We Trust the Dictator’s GDP Growth Estimates?

I study the manipulation of GDP growth statistics in non-democracies by comparing the self-reported GDP figures to the nighttime lights recorded by satellites from outer space. I show that the night-lights elasticity of GDP is systematically larger in more authoritarian regimes. This autocracy gradient in the elasticity is not explained by potential differences in a large set of factors, including economic structure and levels of development, across countries with different forms of government. The gradient is larger when countries have a stronger incentive to exaggerate economic performance or when the institutions that constrain the manipulation of official statistics are weaker. I estimate that the most authoritarian regimes inflate yearly GDP growth rates on average by a factor of 1.15-1.3 and show that correcting for data manipulation provides a more nuanced view on the economic success of non-democracies in recent years.

“Governments themselves usually produce economic estimates, which gives rise to a moral hazard problem, as they are constantly tempted to exaggerate just how well the economy is doing. GDP stands out in this regard as perhaps the most widely used measure of economic activity. As such, it is probably the most profitable for governments to manipulate.

This paper uses nighttime luminosity to detect and measure the manipulation of GDP growth statistics in non-democracies. GDP and nighttime lights provide complementary measures of economic activity, but while GDP is self-reported by governments and prone to manipulation, night lights are recorded by satellites from outer space and are much less vulnerable. Using panel data for 179 countries between 1992 and 2008, I study the relationship between reported GDP figures and nighttime lights across political regimes. In particular, I examine whether the same amount of growth in lights translates into systematically larger amounts of GDP growth in autocracies than in democracies.

The main result of the paper is that the night-lights elasticity of GDP is significantly larger in more autocratic regimes. In other words, I find that a constant amount of growth in lights translates into higher reported GDP growth in autocracies than in democracies. A large battery of further robustness tests indicates that the autocracy gradient in the night-lights elasticity of GDP is not driven by cross-country dierences in other factors that may be potentially correlated with regime type, including geography, economic structure or levels of development.

The observed magnitude of the variation in the night-lights elasticity of GDP across regimes is substantial. The results indicate that the most authoritarian governments inflate yearly GDP growth by a factor of 1.15-1.3. I use these estimates to adjust the long-run growth rates for data manipulation in autocracies. This adjustment has important implications for our understanding of relative economic performance at the turn of the XXI century. 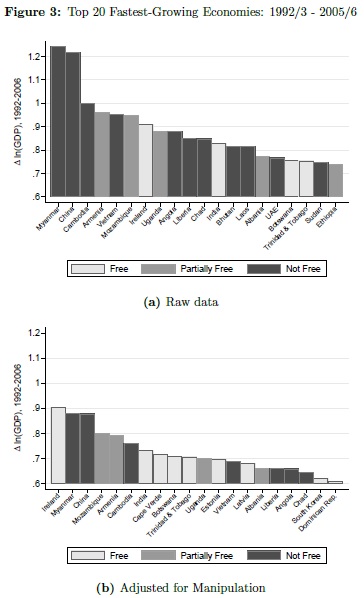