Finding high-quality data with a long history can be challenging. We have already examined How To Extend Historical Daily Bond Data To 100 years, How To Extend Daily Commodities Data To 100 years, and How To Build a Multi-Asset Trend-Following Strategy With a 100-year Daily History. Following the theme of our previous articles, we decided to extend historical data of a new factor, the Dollar Factor. This article explains how to combine multiple data sources to create a 100-year daily data history for the Dollar Factor, introduces data sources, and explains the methodology.

Edit: The article was edited on the 28th of September. We fixed calculation issues in the estimation of the USD exchange rate in the period 1926-1971.

What is the Dollar Factor?

The Dollar Factor measures the value of the United States Dollar (USD) relative to its most important trading partners’ currencies. Currently, the six foreign currencies are used for the calculation of the US Dollar Index (DXY): Euro (EUR), Japanese Yen (JPY), Pound Sterling (GPB), Canadian Dollar (CAD), Swedish Krona (SEK), and Swiss Franc (CHF). The Dollar Index goes up as the dollar strengthens compared to the aforementioned currencies. To some extent, it reflects the US economy relative to the rest of the world. However, the historical data of DXY cover only the time range from 1971 until the present. Therefore, we have collected multiple data from 1926 to help us extend historical data for the Dollar Factor.

How to build a 100-year daily history of the Dollar Factor?

As we obtained the monthly exchange rates, we calculated monthly performances for every pair USD/XYZ. Finally, using GDP from Wikipedia’s List of regions by past GDP for Europe: 1830–1938 (Bairoch) as weights, we calculated the index using the 1925 GDP value for the time interval 1926-1937, and the 1938 GDP value for the time interval 1938-1953. Unfortunately, our data are at a monthly frequency only. Therefore, we describe how to transform them into daily data below.

As we can see on the graph, significant changes marked the 1930s and 1940s. In 1933 US Dollar rapidly deteriorated compared to the Deutschmark, Pound Sterling, and French Franc. What was the reason for these changes?

In 1933, the United States suspended the gold standard, an imbalance between USD currency and those of the gold bloc grew (for example, France). This imbalance caused the US Dollar devaluation, raising import prices and lowering export prices in the United States. Finally, the Tripartite Agreement stabilized exchange rates and ended the currency war from 1931 to 1936.

The rise of the USD in the late 1940s was caused by the significant strength of the US economy compared to its usual peers (European countries like France, the UK, Germany, Benelux countries, and northern Europe) that were weakened after WW2. The United States emerged as a clear winner of the war, and a series of devaluations against the USD followed in the late 1940s.

The data from 1953 to 1971 were obtained from bis.org. For the second period, we collected the daily exchange rates of US Dollar against several currencies: Belgian Franc (BEF), Canadian Dollar (CAD), Swiss Franc (CHF), Deutschmark (DEM), Danish Krone (DKK), French Franc (FRF), Pound Sterling (GBP), Italian Lira (ITL), Dutch Guilder (NLG), Norwegian Krone (NOK), and Swedish Krona (SEK). To calculate the Dollar Factor, we had to calculate daily performances and similar to the first period, we used GDP as weights to calculate the index. However, for this period, we used the values from List of regions by past GDP for World: 1–2008 (Maddison) for the year 1950.

As we have already mentioned, it is necessary to transform the monthly data from the first sub-period (1926-1953) into daily data. On the other hand, the data from the last two sub-periods (1953-2022) were on a daily frequency, so there is no need to modify them. Unfortunately, there is no daily proxy to estimate the daily volatility for the first period. For that reason, we applied simple linear interpolation, similar to the one we used in Extending Historical Daily Bond Data to 100 Years. In the first step, we calculated the cumulative difference between the two data points every month and got the daily interest. Subsequently, we cumulated the respective interests each day. Yet, there is a disadvantage of the linear interpolation – the resulting curve has zero intra-month volatility. 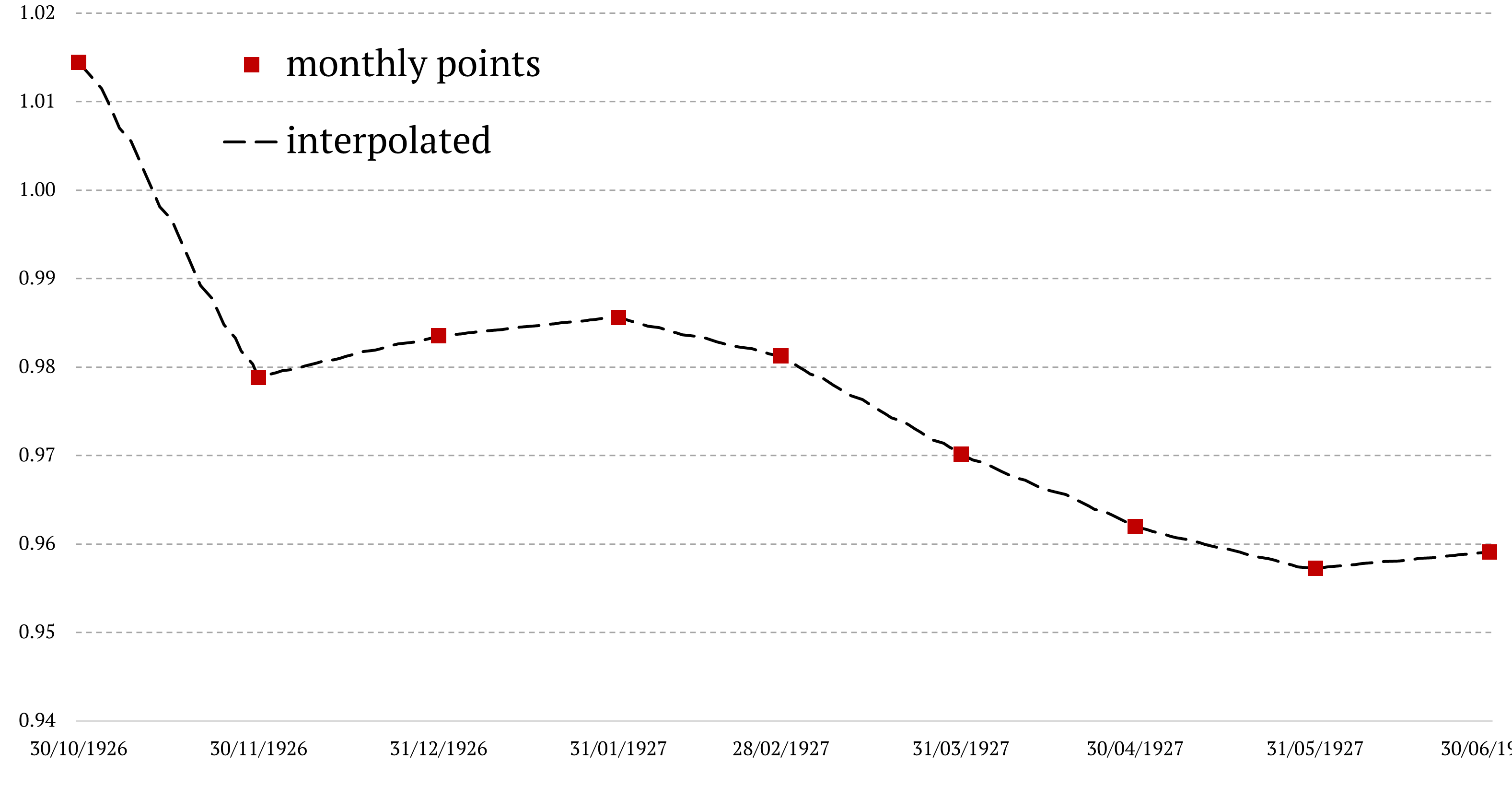 Finally, we combined the data series from three different periods into one time series.