Radovan Vojtko
CEO, Quantpedia.com
An Analysis of Momentum Behaviour in a Long-Term

A recent paper takes a look on a long-term behaviour of momentum portfolios. Related to all equity momentum strategies, mainly to:

"A set of studies propose behavioral hypotheses to explain the momentum anomaly. An implication of some of these models is that the momentum phenomenon is a result of delayed overreaction to certain information shocks. This implies that a sufficiently `stale' momentum portfolio, where `stale' refers to a momentum portfolio formed at a lag of twelve months or more, will on average earn negative abnormal returns.

In particular, we examine the relation of stale momentum returns to a measure of the recent performance of the momentum strategy, which we call Past Momentum Performance or PMP. PMP is simply the return of a standard (12,2) momentum strategy over the preceding 2 years (24 months). Our basic finding is that momentum portfolios formed in high PMP months (months when PMP is in the top 20% of all months in our sample) generate strongly negative returns and alphas 2-5 years after formation. Strikingly, momentum portfolios formed in low PMP months continue to (weakly) outperform in post-formation years 2-5. Thus, the momentum reversal documented by Jegadeesh and Titman (2001) is strongly state dependent.

We explore a set of behavioral hypotheses for the strong dependence of stale momentum performance on PMP. One of our hypotheses is based upon style chasing.

In contrast, after low PMP, investors switch out of the momentum style. Heavy selling of winners and buying of losers induces underreaction in winner and loser returns. So after low PMP, this hypothesis implies eventual positive returns to a stale momentum strategy. Putting these two cases together, we expect reversal of momentum to be stronger as PMP increases.

Motivated by these ideas, we examine the relationship between PMP and the performance of stale momentum portfolios and find a number of novel effects. We first show that over the full CRSP sample, there is on average very little tendency of momentum to reverse after controlling for the value effect. This finding is in contrast to that of Jegadeesh and Titman (2001) who find, in a shorter sample, that equal-weighted momentum portfolios exhibit strong reversals even after controlling for the value effect.

Then, turning to our main result, we find a strong relationship between PMP and long-run reversal of momentum – reversal is greater after high PMP. Specifically, we rank the months in our sample into quintiles based on PMP and examine the performance of momentum portfolios formed in each category of month (i.e., for months in each PMP quintile) during the five years after formation. Stale momentum performance declines strongly and monotonically with PMP. In Quintile 1, instead of reversal, momentum portfolios exhibit weak continuation in post-formation years 2-5. In sharp contrast, momentum portfolios formed in Quintile 5 months lose 42% of their value over the next five years. We call this strong reversal of momentum after high PMP the PMP effect. 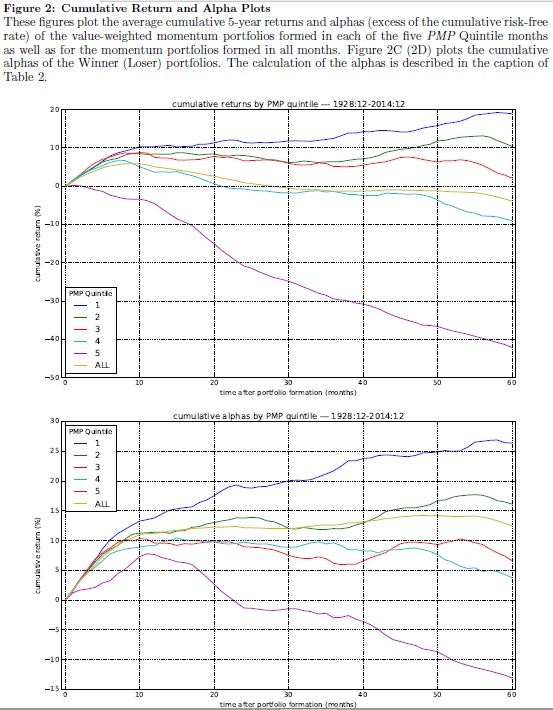