This paper studies the efficiency and price formation of bitcoin and other cryptocurrency markets. First, there are large recurrent arbitrage opportunities in cryptocurrency prices relative to fiat currencies across exchanges that often persist for several days or weeks. These price dispersions exist even in the face of significant trading volumes on many of the exchanges. The total size of arbitrage profits just from December 2017 to February 2018 is above of $1 billion. Second, arbitrage opportunities are much larger across than within the same region; they are particularly large between the US, Japan and Korea, but smaller between the US and Europe. But spreads are much smaller when trading one cryptocurrency against another, suggesting that cross-border controls on fiat currencies play an important role. Finally, we decompose signed volume on each exchange into a common component and an idiosyncratic, exchange-specific one. We show that the common component explains up to 85% of the variation in bitcoin returns and that the idiosyncratic components of order flow play an important role in explaining the size of the arbitrage spreads between exchanges.

"While significant attention has been paid to the dramatic increase in the volume and price of cryptocurrencies, and many commentators have highlighted their price volatility, there has not been a systematic analysis of the trading and efficiency of cryptocurrencies markets. In this paper we attempt to fill this gap.

In the following we document a number of stylized facts about cryptocurrency markets. First, we show that there are large arbitrage opportunities in bitcoin prices across exchanges that open up recurrently across different exchanges and often persist for several hours, and in some instances even days and weeks. These price dispersions exist even in the face of significant trading volumes on the exchanges. We construct an arbitrage index to show the maximum deviations in the price of bitcoin versus USD at different intervals. The index is calculated each second (each minute in the beginning of the sample), as the ratio of the maximum price of bitcoin on any exchange to the minimum price of bitcoin on any other exchange where bitcoin is traded. On an average day the arbitrage index is 1.05 in 2017. But there are several months where the arbitrage index shoots up to 1.5. For example, in December 2017 and January 2018 there were more than 15 days, where the maximum difference in bitcoin prices across exchanges was more than $3000.

To provide a sense of the magnitude of the money left on the table, we calculate the daily profits that could have been achieved in this market. We find that the daily amount of arbitrage prots between these markets was often more than $5 million a day, and for several days in December 2017 and January 2018, the daily profits reached $30 million. The total size of arbitrage profits in the period December 2017 – February 2018 is estimated to be at least $1 billion under the most conservative assumptions. 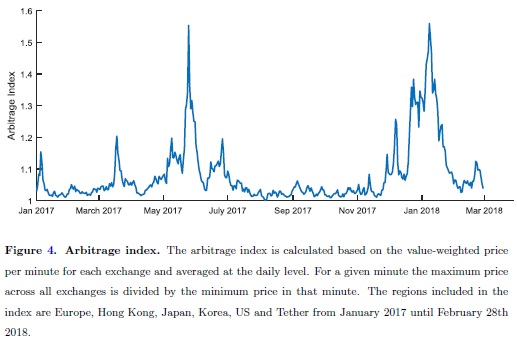 Second, we show that arbitrage opportunities are much larger across countries (or regions) than within the same country. We recalculate our arbitrage index separately for each country where there are several significant cryptocurrency exchanges. We find that the average size of the arbitrage index within US, Europe, Japan and Korea has an average value of around 1.01 to 1.03, compared to a value of 1.15 to 1.6 for the total arbitrage index. Similarly, the daily average price ratio between the US and Korea from December 2017 until the beginning of February 2018 was more than 15 percent; and reached 40 percent for several days. This has been noted in the popular press as the "Kimchi premium". Similarly, the average price difference between Japan and the US was around 10 percent, and between US and Europe about 3 percent. The results suggest that regions which are more closely integrated show smaller cross-region arbitrage spreads. Note, however, that even the within country arbitrage spreads are still large by comparison with more traditional asset markets. For example, Du, Tepper, and Verdelhan (2016) show that deviations from the covered interest rate parity in the currency market after the 2008 financial crisis range between 9 and 23 basis points on average on annualized values. These are an order of magnitude smaller than the ones observed in cryptocurrency markets.

Our findings suggest that there are significant barriers to arbitrage between regions and to a lesser extent even between exchanges in the same country. We show that mere transaction costs cannot explain these results since their magnitudes are small in comparison to the arbitrage spreads we document. The governance risk of cryptocurrency exchanges is also unlikely to explain these arbitrage spreads. First, the exchange risk would have to be correlated within a region to explain the large crossborder arbitrages we observe. Second, one would expect that the exchange risk would be correlated with trading volume and bid-ask spreads. This is not supported by the data, since we find large heterogeneity in the liquidity of exchanges within a region but nevertheless arbitrage spreads are small between them. 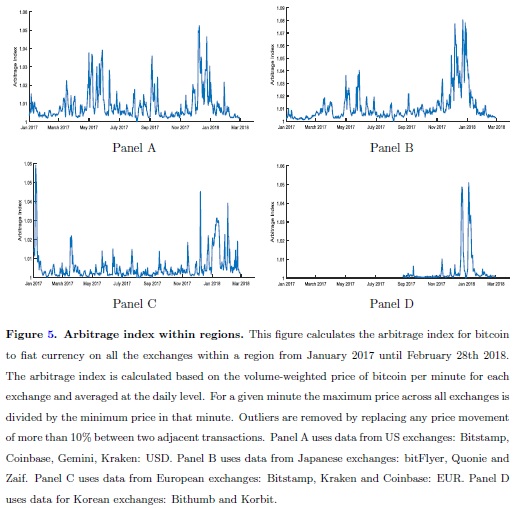 Nevertheless, industry reports suggest that while capital controls are binding for retail investors large institutions are able to avoid these constraints, see for example a recent IMF working paper by Baba and Kokenyne (2011). Thus, capital controls should not impose insurmountable constraints to arbitrage across regions, but they add to the cost of arbitrage. They may be the reason why arbitrageurs are unable to scale up their trading strategies with the intensity of noise trader activity in a timely fashion. We observe a recurring pattern of arbitrage spreads opening up across different exchanges and times which might be the result of a delayed equilibration between noise traders
and arbitrage capital.

In the second part of the paper, we ask how arbitrage opportunities arise in the first place. Previous research in other asset classes attributes the price pressure of net order flow to price discovery, but in the cryptocurrency market it is less obvious whether there are any traders who are more informed than others and what the nature of the information is. Nevertheless, we show that a strong positive relationship also exists between net order flows and prices in the cryptocurrency market. A common way to estimate the impact of net order flow is to regress returns over a particular time period on the signed volume of trades during the same period. The complication in the bitcoin market is that the same asset is traded simultaneously on multiple exchanges. When forming their demand investors might not only look at prices on their own exchange but also take into account prices on the other exchanges where bitcoin is traded. Therefore, we build on the approach used in traditional financial markets and decompose signed volume and returns on each exchange into a common component and an idiosyncratic, exchange-specifiic component.

We use factor analysis to extract the common factors from data at 5-minute, hourly, and daily frequencies. The common component of signed volume explains about 50% of the variation in returns at 5-minute and hour level, and up 85% at daily level. The price pressure at the daily level is mostly permanent. Buying 10,000 bitcoins raises returns by about 4%.

To investigate the role of signed volume in explaining price deviations across exchanges, we show that exchange-specific residuals of signed volume are significant at explaining variation in exchange-specific residuals of returns at 5-minute and hour level. We also show when the price on any exchange deviates above(below) from the average price on other exchanges, subsequent returns on this exchange are predicted to be lower(higher) than the returns on other exchanges. Furthermore, the predictive power of the local average price index is higher for exchanges in this local market. These results show that arbitrage spreads open up in periods when there are differential price
pressures through idiosyncratic signed volume on one exchange relative to another. The arbitrage spreads are not arbitraged away immediately but they do predict subsequent relative returns on exchanges. This lends further support to our interpretation that cryptocurrency prices are the result of a balance between the idiosyncratic sentiments of noise traders and the efforts of arbitrageurs to equilibrate prices across exchanges.