A recent academic research looks at effects of algorithmic trading during turbulent times:

A key issue raised by the rapid growth of computerised algorithmic trading is how it responds in extreme situations. Using data on foreign exchange orders and transactions that includes identification of algorithmic trading, we find that this type of trading contributed to the deterioration of market quality following the removal of the cap on the Swiss franc on 15 January 2015, which was an event that came as a complete surprise to market participants. In particular, we find that algorithmic traders withdrew liquidity and generated uninformative volatility in Swiss franc currency pairs, while human traders did the opposite. However, we find no evidence that algorithmic trading propagated these adverse effects on market quality to other currency pairs.

"We analyse the role of AT in foreign exchange (FX) markets in a period containing the 15 January 2015 announcement by the Swiss National Bank that it had discontinued its policy of capping the value of the Swiss franc against the euro. This ‘Swiss franc event’ represents a natural experiment as one of the largest shocks to the FX market in recent years and probably the most significant ‘black swan’ event in the period in which AT has been a prominent force in FX markets. In particular, we study the contribution of AT and human traders to two important dimensions of market quality, namely liquidity and price efficiency. Our analysis is based on a unique dataset with a detailed identification of AT obtained from EBS Market, which is the leading platform for electronic spot FX trading in many of the major currencies.

A detailed understanding of AT in distressed situations is important for at least two reasons. First, a better comprehension of whether AT is beneficial or detrimental for market quality in extreme situations would help inform the ongoing reform of trading venues. Second, the resilience of an exchange system depends on the behaviour of different types of market participant and their reciprocal influence on each other. For instance, a tendency of AT to offer liquidity in calm markets and withdraw it in distressed situations could lead less sophisticated agents to become reliant on high levels of market liquidity only to find it in short supply when they most needed it. If these adverse consequences of AT were predominant or not offset by other traders, then AT could represent a systemic threat to the whole trading system. To shed light on this key issue for financial stability, we analyse whether human traders and AT substitute for or complement each other in supplying and consuming liquidity.

We proceed in three steps. First, we describe the EBS Market platform and our sample of data from it. Second, we perform an in-depth analysis of market liquidity and price movements by decomposing order flow, effective spreads and intraday volatility by type of trader. This enables us to highlight the contribution of AT and human traders to liquidity provision and consumption, transaction costs and realised volatility. Third, we study the contribution to efficient pricing of AT and human traders.

Our study delivers two important findings. First, in reaction to the Swiss franc event, we find that AT tended to consume liquidity and reinforce the price disruption. Opposite and offsetting patterns apply for human traders, who supported market quality by providing liquidity and aiding price discovery. Second, we find that this market quality degradation coming from AT was concentrated in the shocked FX rate (EUR/CHF) and, to a lesser extent, USD/CHF. Non-CHF currency pairs (USD/JPY, EUR/JPY and EUR/USD in our sample) were essentially unaffected.3 This suggests that AT models were somewhat compartmentalised, which, along with human trading, helped to sustain market quality beyond the CHF currency pairs.

Figure 4 shows the prices at which different types of trader exchanged euros for Swiss francs in the 30 minutes following the SNB announcement depending on whether their trades were consuming liquidity (top panel) or providing it (bottom panel). Trades that consume liquidity result from IOC orders, while those that provide it result from GTC orders. The top panel shows that bank AIs consumed liquidity at extreme prices (prices significantly different to those of immediately preceding trades) on a number of occasions, notably between 9.31 and 9.36. Thus, over 75% of the cumulative appreciation of the franc in the 20 minutes to 9.50 was attributable to bank AIs, which accounted for 61% of the volume of liquidity-consuming trades. Indeed, we show below that bank AIs accounted for an even larger share of the realised variance of the EUR/CHF rate at this time. The lower panel shows that bank AIs also provided liquidity for some of the extreme-price trades. That bank AIs both consumed and provided liquidity at extreme prices may reflect the diverse set of traders from whom these trades may originate. This includes not only the different banks but also their various clients. In addition, a roughly equal number of extreme-price trades were accommodated by human traders. Indeed, human traders accounted for a significantly higher share of liquidity-providing trades (50%) than they did for liquidity-consuming trades (19%) during the 20 minutes to 9.50 when the Swiss franc appreciated sharply. 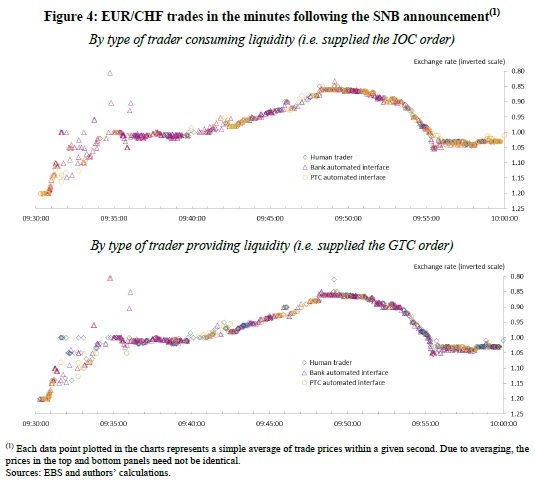 Figure 5 gives an overview of the reaction of both the EUR/CHF and USD/CHF markets to the SNB announcement over the whole trading day of 15 January 2015. The first row shows that the Swiss franc appreciated extremely sharply against both ‘base’ currencies in the first 20 minutes following the announcement, but that sizeable portions of these gains were reversed in the subsequent hour. After that the two spot rates were much more stable, with the Swiss franc worth about 10% more than at the start of the day. The second row shows that algorithmic traders were net purchasers of Swiss francs over the day, particular bank AIs against the euro and PTC AIs against the US dollar, while human traders were net purchasers of the base currencies. Thus, computers traded ‘with the wind’, buying the franc as it appreciated, while humans ‘leaned against the wind’. Note, however, that human traders did not make net purchases of the base currencies in the key 20-minute period immediately after the announcement. Finally, the third row shows that human traders were consistently net suppliers of liquidity over the day, while PTC AI trades consumed it. However, as we shall see below, net liquidity consumption by PTC AIs is not unusual in these two currency-pairs. 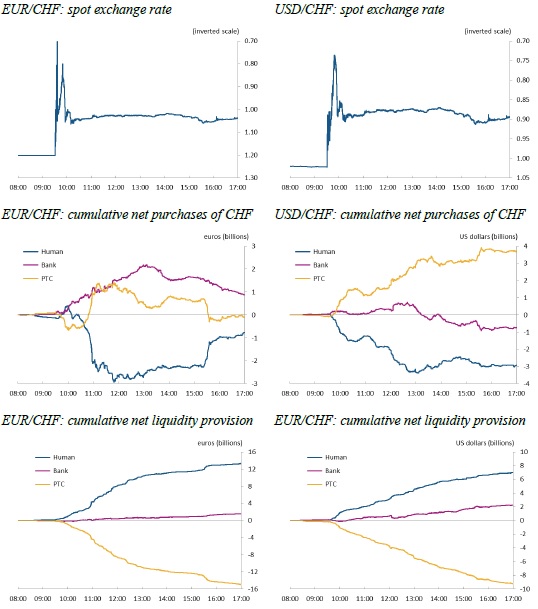