An interesting academic paper about the intristic value of Gold:

In this paper, we propose a gold price index that enables market participants to separate the change in the ‘intrinsic’ value of gold from changes in global exchange rates. The index is a geometrically weighted average of the price of gold denominated in different currencies, with weights that are proportional to the market power of each country in the global gold market, where market power is defined as the impact that a change in a country’s exchange rate has on the price of gold expressed in other currencies. We use principal components analysis to reduce the set of global exchange rates to four currency ‘blocs’ representing the U.S. dollar, the euro, the commodity currencies and the Asian currencies. We estimate the weight of each currency bloc in the index in an error correction framework using a broad set of variables to control for the unobserved intrinsic value. We show that the resulting index is less volatile than the USD price of gold and, in contrast with the USD price of gold, has a strong negative relationship with global equities and a strong positive relationship with the VIX index, both of which underline the role of gold as a safe haven asset.

"The market for gold is one of the largest and most liquid in the world, surpassed only by the major currency pairs in terms of daily turnover. The price of gold, like that of many commodities, is conventionally quoted in USD. However, gold is not exclusively a US asset and so the return from an investment in gold, when calculated using the quoted USD price, conflates the change in the value of gold with the change in the value of the USD. In this paper, we develop a gold price index, which when used to compute returns, reflects changes in the intrinsic value of gold independently of concurrent changes in global exchange rates.

Various index-based approaches go some way towards removing the exchange rate component of the gold price, they do not properly reflect the intrinsic value of gold because they use arbitrarily defined weights that do not represent the actual impact that changes in individual exchange rates have on the quoted gold price.

The gold price index that we develop can be thought of as a geometric weighted average of the normalized real (i.e. inflation-adjusted) price of gold in different currencies. The weight of each currency is proportional to that country’s market power in the global gold market, as reflected in the impact that a change in the country’s real exchange rate has on the real price of gold quoted in other currencies. We cast the relationship between the price of gold, exchange rates and a broad set of fundamental variables in a cointegration framework, in which we simultaneously model both the long run relationship between the price of gold and its determinants, and its short run dynamics. We use weekly data from 3 January 1995 to 26 October 2015 for 23 exchange rates against the GBP. In view of the very high correlations between many individual exchange rates, we use principal components analysis to extract the significant underlying exchange rate factors. 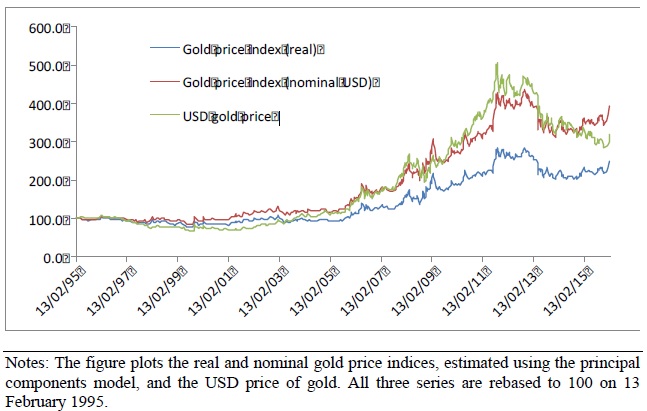 We then estimate the short run dynamics of the change in the gold price as a function of (1) changes in exchange rates, (2) changes in fundamentals and (3) the lagged error correction term that captures the deviation from long run equilibrium. The short run elasticities from this regression are then used as weights in the gold price index. Using the full sample to estimate the model, we show that the (normalized) weights on the USD bloc, the commodity bloc and the EUR bloc are about 21%, 48% and 31%, respectively, reflecting the relative importance of these currency blocks for production, consumption and investment in the global gold market. The weight on the Asian currency bloc is not significantly different from zero. We convert the real gold price index into a nominal USD gold price index to enable a comparison with the USD price of gold. We show that the nominal gold price index is less volatile than the USD gold price and, in contrast with the USD gold price, has a strong negative relationship with global equities and a strong positive relationship with the VIX index, both of which underline the role of gold as a safe haven asset."