The financialization of crude oil markets over the last decade has changed the behavior of oil prices in fundamental ways. In this paper, we uncover the gradual transformation of crude oil from a physical to a financial asset. Although economic demand and supply factors continue to play an important role, recent indicators associated with financialization have emerged since 2008. We show that financial variables have become the main driving factors explaining the variation in crude oil returns and volatility today. Our findings have important implications for portfolio analysis and for the effectiveness of hedging in crude oil markets.

“We decompose the total variation of crude oil returns and volatility into three distinctive parts: One part that can be explained by economic fundamental factors, one part that can be explained by financialization variables, and a third which consists of the unexplained variation. While decomposing the returns provides information concerning the main drivers of crude oil as an asset, the volatility decomposition reveals the main factors of risk transmission. We show that the relative importance of economic and financial variables changes over time. In particular, the relative importance of financial variables has changed in such a way that crude oil is now closer to a financial asset than to a real physical asset.

Panel A of Figure 4 shows the decomposition of the total variation in crude oil returns. The fraction of the total variation that can be explained by movements in economic variables is indicated by green shaded areas, the percentage that can be explained by financial variables is indicated by the red shaded areas. The remaining variation is unexplained. The large share of unexplained variation may be due to omitted factors such as geopolitical changes, synchronized OPEC oil production, and disrupting weather events. At a given point in time, the sum over all green and red shaded areas represents the R-squared from a regression of monthly crude oil returns on our set of explanatory variables. To obtain time variation, the regression is moved forward in a 5-year rolling window (60 monthly observations). Two observations follow from Figure 4:

During the pre-financialization period, the contemporaneous variation in our eight regressors explains only a small percentage of the total variation in crude oil returns. After the default of Lehman Brothers, the situation changes dramatically. The same set of regressors now explain almost 60% of the return variation. Among the fundamental variables, economic activity and the change in the dollar exchange rate explain 8% and 12% respectively.

The main drivers behind the variation in oil returns are however the financial variables. In particular, the change in the VIX and the S&P 500 returns are responsible for 29% of the variation.

To illustrate this point, the average fraction explained by each set of variables is shown in Panel B of Figure 4. Since the beginning of the financialization period, the financial variables dominate the economic fundamental variables by a significant amount. Traditional fundamental variables have become relatively less important for predicting crude oil returns while recent financial variables can now predict a large share of the return variation. From this finding we conclude that the behavior of crude oil has become more similar to that of financial assets like equities rather than traditional economic demand and supply drivers. 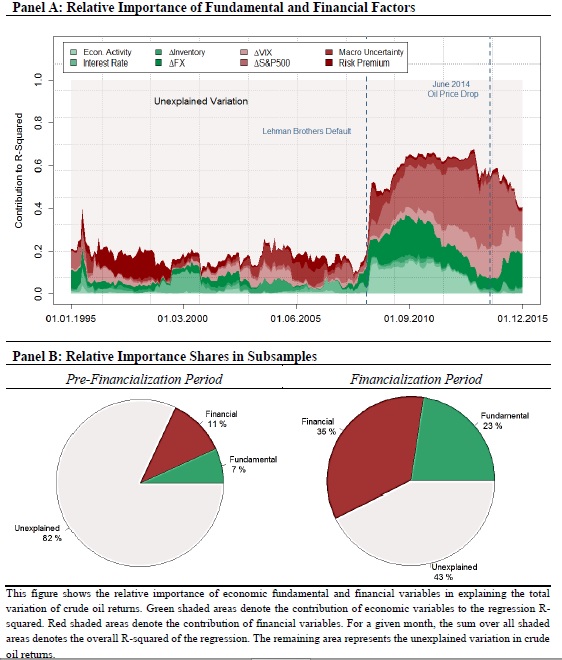 Financial variables can only explain 11% of the total variation in crude oil returns in the years prior to financialization, the impact grows to 35%, becoming the main drivers behind oil price movements. We estimate an even stronger effect on crude oil volatility where the impact of financial variables grows from 19% in the pre-financialization period to 53% since the failure of Lehman Brothers. Our empirical results indicate that crude oil markets underwent significant changes over the last years. These changes were sufficiently large to transform the very nature of crude oil, away from a physical real asset towards a variable that shows a behavior that is comparable to stocks, bonds, and other financial assets.”